This blog was originally posted on April 25, 2012 and was written by Diana Sanchez.

Condoms are one of the most commonly used contraceptive/STD prevention products used worldwide. The 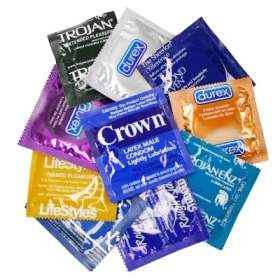 United Nations Population Fund estimated that over 10 billion condoms were used in 2005.  Here on campus, Campus Health Services provides thousands of condoms to students each year.

As a sexual health counselor, I have noticed that many people’s preferences for certain condom brands are based (almost entirely) on their perception of that condom brand’s effectiveness. We offer a variety of condom brands for free to students through Campus Health Services. Occasionally, when people check out the condoms we have available, they’ll ask: “are those safe to use?”, and “don’t those break more than [other condom brand]?”.

So, do some condoms in fact perform better than others in terms of STD/pregnancy prevention?

The answer is no, not really. Condoms are regarded by the United States Food and Drug Administration (FDA) as “Class II medical devices”, a designation that includes pregnancy tests and powered wheelchairs.  Products in this category have to meet special labeling requirements and performance standards. For condoms, the FDA standards include systematic “water leak” tests to ensure that no fluid can leak out of the condoms. To meet standards, all condoms must have at least 996 out of 1,000 condoms, on average, pass this test. This means that FDA-approved condoms must be at least 99.6% effective in laboratory tests to be available to consumers.

In a 2004 publication, Walsh and colleagues used condom use data from trials of three bands of condoms, including Trojan, LifeStyles and Ramses – all of which are FDA-approved condom brands. Out of 3,677 condom-protected sex acts analyzed in the study, the authors found that 55 condom acts failed, either due to breaking (16 condoms broke; break rate = 0.04%) or slipping (39 condoms slipped; slip rate = 1%). The likelihood of condoms breaking during sex was not statistically associated with condom brand.

FDA-approved condoms are all quite effective at preventing pregnancy and STD, and performance is probably not related to brand type. You might be wondering if the condoms you’re using are FDA-approved. With the exception of novelty condoms (which are pretty uncommon), just about all of the condoms you’ll come across in the United States are approved by the FDA.  All the condoms we provide through Campus Health Services are FDA-approved, and same goes for places like Planned Parenthood and local STD/HIV clinics. If you’d like to be certain, you can check the condom packet to look for wording about STD and pregnancy prevention. If it’s on the packet, those condoms meet federal regulations for quality and safety.

Check out the following pictures to see how we’ve looked for this language on some condoms we provide at Campus Health Services:

All of this said, although condoms must be at least 99.6% effective in safety trials, testing conditions do not necessarily mean 99.6% real-life effectiveness for any condom brand. But here’s the good news:  there’s a lot you can do to increase the effectiveness of condoms. One of the biggest challenges to condom effectiveness is correct use.  Some of the most common errors with condom use are: using the wrong lubricant (water-based, NOT oil-based, lubricants should be used with condoms); incorrect storage (ie, storing a condom in a hot place, like a glove compartment, or in a place with lots of friction, like a wallet or pocket); and not checking the expiration date.

One thought on “FLASHBACK FRIDAY: Condom effectiveness: What’s brand name got to do with it?”