After 3 years at UNC-Chapel Hill, I have become very familiar with the general clinic at Campus Health Services but I had never really utilized their Women’s Health Services until this October when I got an intrauterine device (IUD). I am currently interning in a position where 10 hours of my week involves researching articles about reproductive justice issues, many of which are about birth control access and affordability. At the time I began the internship, however, I was not on birth control. The risk I was taking really started to nag at me, making anything intimate seem extra nerve-wracking and less enjoyable until I finally decided to do something about it.

A few weeks prior to making the decision to get an IUD, I had to go to campus health multiple times for a cold that just wouldn’t go away. Each time I was there, I couldn’t help but appreciate the free condoms throughout the building and the pamphlets on safe sex that included tips for queer people. But what really caught my attention were the charts on birth control in every exam room I visited, like this one:

I saw that with condoms, my go-to method of birth-control at the time, there was still anywhere between a 2%-18% chance of getting pregnant (depending upon whether or not they are used correctly).  I had tried things like the pill and the NuvaRing in the past but I was always forgetting when to take the pill or when to replace the ring which I knew made them less effective. I decided that an IUD would be the best way to go; not only are IUDs more effective than birth-control pills and the NuvaRing, they last for years.

The first time I heard about an IUD was in a magazine article in 2012. Even then, I recognized the benefits and expressed interest in getting one to my gynecologist in Cary at the time. She didn’t think it was a good idea and successfully scared me into changing my mind. She told me that, since I had never given birth, it would be painful and that this pain was too much for most of her younger clients so she often had to remove their IUDs. She said that the NuvaRing would be my best option since it would be easier to remember and that it was just as effective as an IUD (I now know that both of these statements were false). I expected a similar reaction at Campus Health but was pleasantly surprised to find a wealth of resources about IUDs and to feel supported by both the nurses and the doctors.

I thought I would be able to just show up, have the procedure, and then go about my business for the next 3 years but this was not the case. When you make an appointment to get an IUD at Campus Health Services, you are required to have a brief consultation first so that you can discuss the various types of IUDs and what to expect during the procedure. After that, I also had to make an appointment for a well woman exam so they could check for STDs, do a pap smear, perform a breast exam, and assess my health in general. While it was a little annoying to have to come back so many times, I realized that it was all because Campus Health actually cared about my overall wellbeing. It also provided a good opportunity to get to know the doctor before the procedure.

Usually, CHS prefers to do the procedure when you are menstruating so that they can rule out any chance of pregnancy (even though they do a pregnancy test anyways) because of the life-threatening risks associated with getting an IUD while pregnant. Because of this, some students may have to wait longer than they would like to before they can get their IUD but in the end, it’s really for their own good.

To say that I was impressed with UNC Campus Health Women’s Services would be an understatement. They made sure I felt comfortable about the procedure not only during the procedure itself but before and after it as well. Never once did I feel judged or discouraged from making my decision.

I would encourage my peers to utilize UNC Campus Health’s birth control resources If you attend a different university, don’t be afraid to contact campus health on your campus to see what services they provide. Also, be sure to check out Bedsider for ways to bring birth control to your campus and to compare methods side-by-side.

I’m thankful for birth control. And I’m thankful that Campus Health Services at UNC understands that, as college students, we already have so many things to worry about and that getting pregnant doesn’t have to be one. #ThxBirthControl 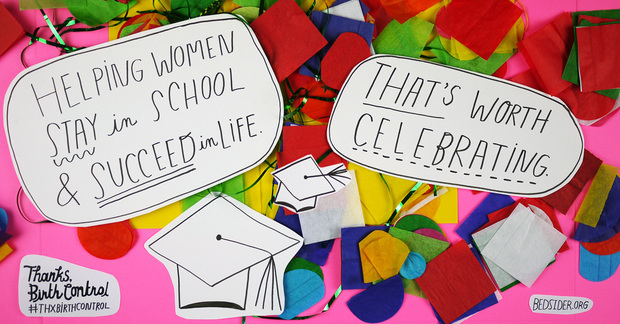 Abby originally posted this content during her internship and agreed to let us re-post here with slight modifications as a guest blog. View the original blog post here.