We all know someone who has been sick recently. Avoid the #uncplague this Cold and Flu season by using these annual reminders about what to do to not get sick.

Wash your hands (and stop touching your face).

Illness is often spread by people getting the a virus on their hands from touching someone or something that a sick person has coughed on, sneezed on, or touched, and then touching their face. In a recent study, random people touched their face 3.6 times an hour and with the same hand also touched common objects that others had touched. So wash your hands and stop touching your face so much.

When should you wash ’em?

We get that it’s difficult – but sleep is critical to keep your body functioning. Getting good sleep is about developing good habits, or “Sleep Hygiene.” Harvard Medical School has a Division of Sleep Medicine website which we highly recommend if you are interested in learning more about sleep. They have listed 12 tips for improving sleep which are amazing. Read them now. Seriously.

Stop and take a sip anytime you pass a water fountain. Carry a water bottle with you to hydrate throughout the day. Drink a glass of water as the first thing you do when you wake up (on second thought: first pee, then drink the water). Drink at least a glass of water with each meal. There are loads of tricks like these to ensure you stay hydrated. Incorporate at least one into your life. 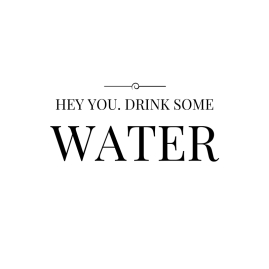 When you are really sick, stay home.

Email your professors, let group partners know that you are sick, and tell your coaches that you cannot come to practice. I am as guilty as anyone I know of breaking this rule regularly; there is still part of me that thinks I just need to “tough it out” and work through it. Unfortunately, our society often still rewards or finds it admirable when individuals fight through a sickness, but we need to change this norm. I am not saying take advantage of a sickness. If you have a sniffle or a tickle in your throat I might not advise that you lay in bed all day, but if you truly are sick, you are protecting others by staying home. You also most likely will not get much out of being in class or at a meeting if you are not feeling well.

Get a flu shot

According to the CDC the number of deaths due to the flu has ranged from as low as 3,000 to as high as 49,000 per year in the United States in recent years.

Get a flu shot. You do NOT get the Flu from a Flu shot. Let me say that again: you do NOT get the Flu from a Flu shot. Some people do get a low-grade fever and headache from the vaccine, but this is just the body reacting to the foreign substance, not the Flu. According to the CDC, vaccines have saved more than 732,000 lives and trillions of dollars over the last 2 decades. There is also absolutely no evidence that the Flu vaccine –or any other vaccines– present significant harm, and the idea that vaccines cause autism is a complete myth. The worst that could happen is that the Flu shot does not provide protection for the strain of the Flu that is being passed around but, even in that case, there is nothing lost by getting the shot. Most people who work in public health agree that vaccinations are one of the most important innovations of modern medicine and protect not only the individual getting the shot, but others around them.

So each flu season, get yourself that flu shot. The vaccine is available on campus without appointment at either Campus Health Pharmacy or Student Stores Pharmacy.

Do what you can to stay well, friends. And when you get sick, check out Campus Health’s cold-care guide or make an appointment.