It’s exam time and that means hours and hours of sitting while staring at a book or computer screen. Taking short exercise breaks is a great way to refresh your mind and feel rejuvenated. Hopefully, you can still make it to the gym like usual. But if you feel trapped in your room or the study lounge, don’t hesitate to push out some of these moves!

For these moves, you don’t need any equipment – you can just use your bodyweight! You can tone from head to toe by just taking a few steps away from your desk. 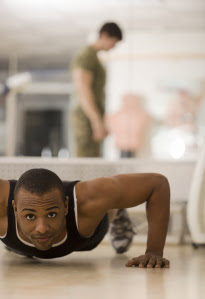 Just remember, both gyms are operating have different hours during exam time. Click here for the schedule. Also, there are fewer group fitness classes then normal so check out those updated schedules as well! While you’re studying, don’t forget to eat healthy snacks for focus, take breaks here and there and stay hydrated (especially if you’re drinking a lot of caffeine!).

About this time of the school year, an intense feeling of stress, anxiety, and panic begins to fill the air in the UNC libraries. The first round of midterms is on its way. Here we see a hundred or so desperate students cramming for their exams with their eyes glued to textbooks and laptops. But next to the stack of lecture slide printouts and notebooks on the table is often a pile of chips, candy, cups of Starbucks, and cans of Red Bull. But did you know that what you eat can have an impact on how well you perform on exams?

“I usually eat healthy, but it gets difficult around midterms and finals time,” explains Autymn Harris, a second year English major. “I plan my meals ahead when I can, but sometimes find myself munching on a lot of empty-calorie foods like cookies and fast food because I’m stressed and don’t have a lot of time.”

Even though students are inclined to neglect their diet for the sake of studying, research shows it’s not a good idea — especially when studying. What you eat can play a large role in how well you study and perform on your exams.

According to Elizabeth Somers, R.D., in her book, Food and Mood, the things we eat affect chemicals in the brain that controls all cognitive functions. When you don’t eat the right mix of foods, your brain just doesn’t work as it should. It can impair functions, such as memory, ability to think clearly and quickly, reaction times, concentration, and the ability to learn.

One study conducted at the University of New Mexico found a link between previous and current diet and test scores. By having a healthy diet for longer period time, you will score better on tests.

There is no doubt that what we eat affects how we study and perform on tests. So if you’re looking for a brain boost, here are some foods you should consider:

What it does for you: Your brain runs solely on carbs (more specifically, glucose). Now, we’re not saying you should start binging on candies and cupcakes — these kinds of carbs gets absorbed in your body too quickly and can lead to a crash. Instead, you should opt for whole grains, which are carbs that your body uses slowly and for a longer period of time.

What it does for you: For many of us, around this time we are more stressed and sleeping less. This causes your immune system to take a hit, making you less likely to be at your best. Antioxidants, such as vitamin E, help protect your body and brain from the typical exam battle wounds.

What it does for you: Some studies show caffeine can raise your brain function and reaction times. However, too much of this stuff will cancel out the benefits and may make you feel too anxious to think clearly. It may also make you more restless when you sleep and cause your body stress. Moderation is key when it comes to caffeine and studying.

What it does for you: Your body makes this nutrient itself, but adding some to your diet may improve your studying. Research from Massachusetts Institute of Technology found that choline has a big impact on your memory. In fact, those diagnosed with Alzheimer’s, a condition associated with memory loss, have a significant drop in choline production, indicating its importance to memory.

What it does for you: There are many reasons that people call fish “brain food.” For one, it contains omega-3s, which affects how well nutrients from the foods you eat get into your brain. It ultimately helps to improve brain activity and reduce memory loss as we age.

What it does for you: You may not exactly consider this food. However, chewing gum has been found to improve memory and attention span, according to UK psychologists. Those who chewed gum during tests did much better than non-chewers.

What it does for you: It’s important to down some water before you start scribbling on your scantron. According to a study from the University of Bristol, participants that drank water around the time of a test scored 10% better than their thirsty classmates.

The typical foods we eat when we cram for exams may react badly with our bodies. You may not have a lot of time on your hands, but it’s still possible to make better choices. You can make a quick turkey sandwich at home in under five minutes, while making your midnight Wendy’s run would probably take longer and may even harm your studying. If you want the best chances of surviving your exams, eat consciously and aim for a balanced diet.

Finals making you feel anxious, intimidated, or stressed? You’re not alone. A common theme we see at the UNC-CH Learning Center this time of year is the feeling of being overwhelmed by the difficulty of making it through final exams. Luckily, our years of experience working with students has helped us formulate the following helpful framework for exam success.

1. Prioritize to help make decisions about how much time to allot to prep for each exam.

First use your syllabi to make a list of key concepts you must know for the test. Hide all notes and books and test your understanding on each key concept. Ask yourself how well you can summarize main ideas, do sample problems, recall facts from memory, and apply concepts in a new way. Finally, rate yourself. How did you do? Rate your skill and understanding on each bit of content from your list using this sample scale:

Make a study guide, merging main ideas from class notes and readings. Find ways to actively engage with the material and stay accountable to learning. Reviewing lecture notes and assigned readings can often be too passive.  Use active study strategies to practice the content you rated with a 1 or 2:

Once you’ve selected study tasks for the concepts you rated 1 and 2, estimate how much time you will need to complete them. Look over your calendar and lay out a plan, noting exactly what you will be doing and for how long. Break down studying into specific, discrete tasks. “Study Chem” is too vague.  “Complete practice problems from chapter 3” is specific. Estimate how long each task might take and compare it to available time.  Create an “appointment” to complete practice problems.

When you’ve completed your Study Plan, it’s time to test yourself again. Hide all your materials and test your understanding on concepts you rated 1 and 2 the same way you did in Step 1.

6. Come to the Learning Center!

In addition to the strategies above, you can come to the Learning Center for our Study Boot Camps. Find out more about our Boot Camps and other services such as Academic Coaching and Peer Tutoring at http://learningcenter.unc.edu/.

With exam season on the way and the end-of-semester paper crunch coming, students will be turning to caffeine to help them make it through the long days (and nights) of work. It’s important to know that caffeine cannot replace sleep, and that your brain works best when you have time to sleep before taking an exam. So plan ahead, prioritize, and get some sleep! Your GPA will thank you. Also, learn more about caffeine by checking out the cool info-graphic below. Click to enlarge. Happy Studying!

This blog is dedicated to everyone who’s ever been told:

“Just look at the diagram, it makes sense.”

Or “Stop moving around, sit still and just study already.”

Were you never able to just listen? Look? Stop moving? Well, I’m here to validate you, using science (fancy, I know), so the next time that someone tells you to just  _____. You can respond:  “That’s just not my learning style!”

What? Learning style? That’s right. The theory of learning styles was developed by  psychologist, David Kolb, in the 1980’s to explain how and why different people acquired knowledge differently.  Kolb outlined four different potential learning styles based on how learners engage with material by feeling, doing, thinking and/or watching. I won’t delve too deeply into the theory here, but if you’re interested you can find a more detailed explanation here.

Instead, I’m going to focus on the three most popular learning styles categories1, 2: END_OF_DOCUMENT_TOKEN_TO_BE_REPLACED